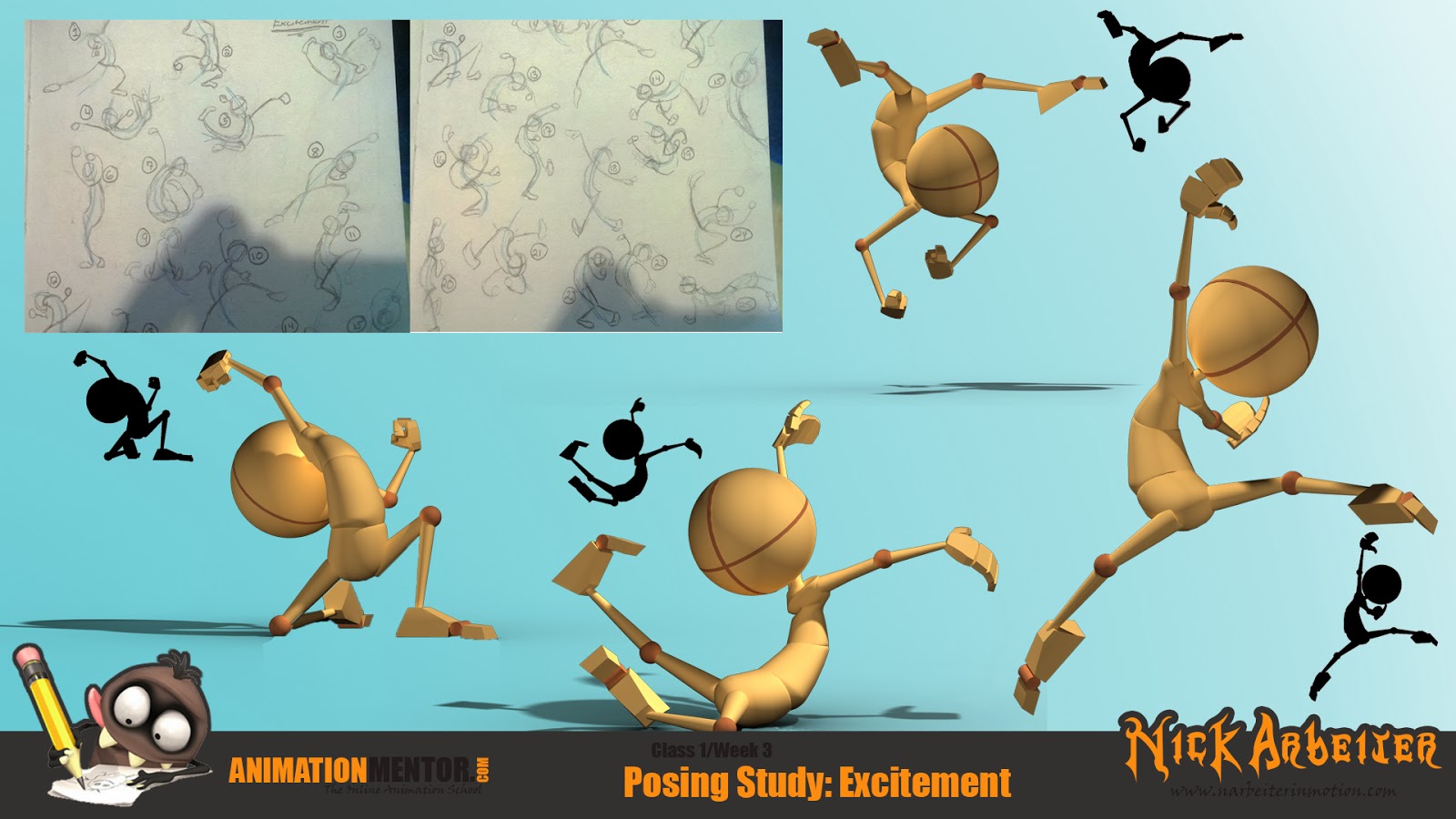 With my new-found affinity for stronger poses, I tried to go pretty extreme this week. Super curved line of actions, overly bent limbs, semi-questionable but somehow still believable actions. That was this week. I had so much fun trying to think of crazy poses to put Stu in. First I went after some reference. And  I found a lot of old Animation Mentor students from Google because of it. Haha. It's easy to make a cliche excited pose. There's only so many forms of excitement that you can show. And the generic arm pumps or the hands raised above you are the quickest ways for portraying the feeling. So it's very hard to quickly portray excitement at a glance, without incorporating at least one of these ideas into a pose. That said, tweaking them or showing that at an odd angle is almost a necessity.

With the arm motions aside, a happier pose has a positive power center to it. And usually tends to have a curve in the line of action around the chest or abdomen. Happier people carry themselves higher, their chests puffed out and their head held high. This usually means that the head is tilted backwards as well. Looking at the poses I made, two of them follow both of these chest and head principles. The one in the corner with Stu leaping probably isn't as strong with his head forward, maybe I should tweak that... see, these posts help me to help analyze my own stuff over again! The one with Stu seated however needs to have his head bent inward to maintain balance with his feet in the air/raised. But I think having the arms in the air helps to make the pose read immediately, and the awkwardly bent leg in the air with the toes curled backward heightens the impression. At least I'm hoping this is all the case, but you the viewer are the one who really decides if it reads or not.

I would like to say that the top pose with his butt above his head was a pose I may have seen from a previous student. However, I didn't straight copy it, because I'm not like that! I recreated an identical pose because I wanted to see how it felt to shape in Maya with a rig, and then I needed to see if it was still readable. Excitement I think definitely comes across, but it's not quite the definition of excitement. I do still think thought, that inside of the right sequence, this pose can definitely be achieved believably. In a real, overly cartoony fashion, this pose works. A lot of people seem to like it. I give full credit for this pose to Juan Carlos Navarro Gomez. He's an alum of Animation Mentor, and a new-found inspiration for me work-wise. I definitely want to be as good as him.

The first rendered pose on the page, the one far left, is an amalgam of poses I found while searching reference. I wanted to try something with the head bent low to be level with his chest. Then I chose to have him seated since most of my poses were either standing or jumping/in air. Well, kneeling. And then I fist pumped because I had a few arms out poses already. I was pretty happy with this pose as well, it was my runner-up choice for final pose for the assignment. It has a strong LOA, and each appendage is legible in silhouette. I made a very big priority to avoid any form of twinning. That's why the legs are splayed, one knee up, and one on the floor. I did my best with the rig to keep the line of the hips continued through the thighs. Same with the shoulders and arms.

Side not, I tried putting the silhouette of the poses with the renders this week. I like it a lot. It helps soooo much. And it's really cool to see them side by side. Now, the final pose, the one I used for my assignment. 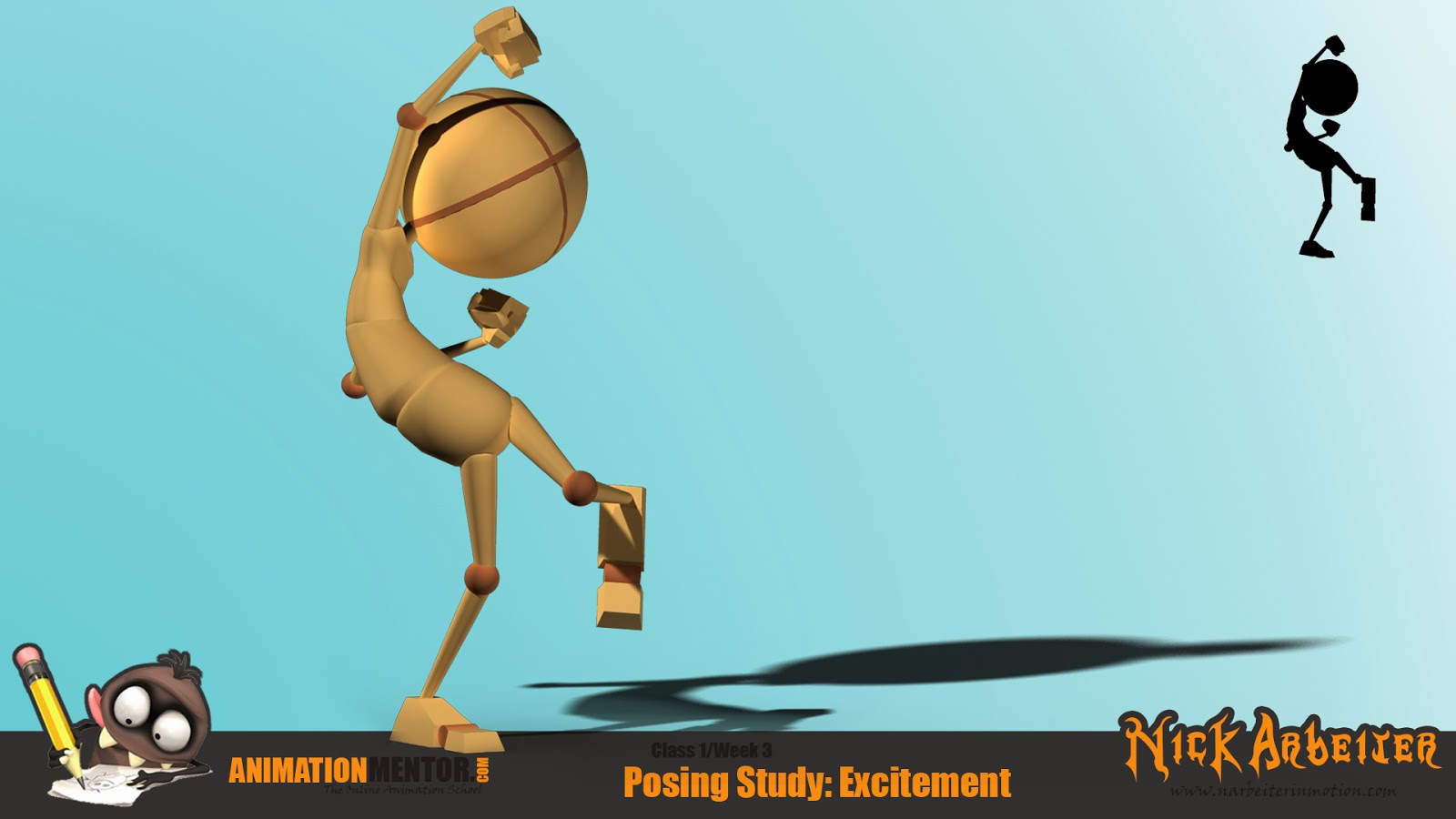 WOOOOOOOOOO! This was how I felt when I got this one finished actually. Curved, LOA that's strong. No twinning. Almost instantly recognizable as excited. And according to someone who's taken my class already in AM, not as cliche as the regular excitement poses! Hearing that from someone farther along than me was a big comment! I also chose this pose because it was more me than the others. Most of these poses where spawns of other poses I found online. This one was something I sketched free of reference on my screen. I just used all of the other work I was doing, and the research I'd done, and this pose was just, there on my page. I really hope my mentor likes this one. And anyone reading this as well!

I'm Such a Poser

But most animators are even bigger and better posers than me! My first Animation Mentor assignment was all about capturing poses and recreating them. We were to go out and sketch some poses that we saw and then choose one, and use the Stu rig to remake that pose in 3D.

I wanted to get some more action oriented poses, so I had a friend of mine get me into UCF's Rec and Wellness center. I really wanted some tennis poses, but no one was playing when I was there. Bummer. I still was able to get some racquetball poses, which were half as good. Then I found some rock climbers and basketball players. And decided to do a couple of weightlifters, but they have mostly straight and twinned poses. But, if you can make some of those poses interesting, good job! It's more  of a challenge for sure.

I ended up making three of the sketches in Maya. I showed the three poses to my fellow classmates, and they helped me to decide on the one I would follow through for the actual assignment. 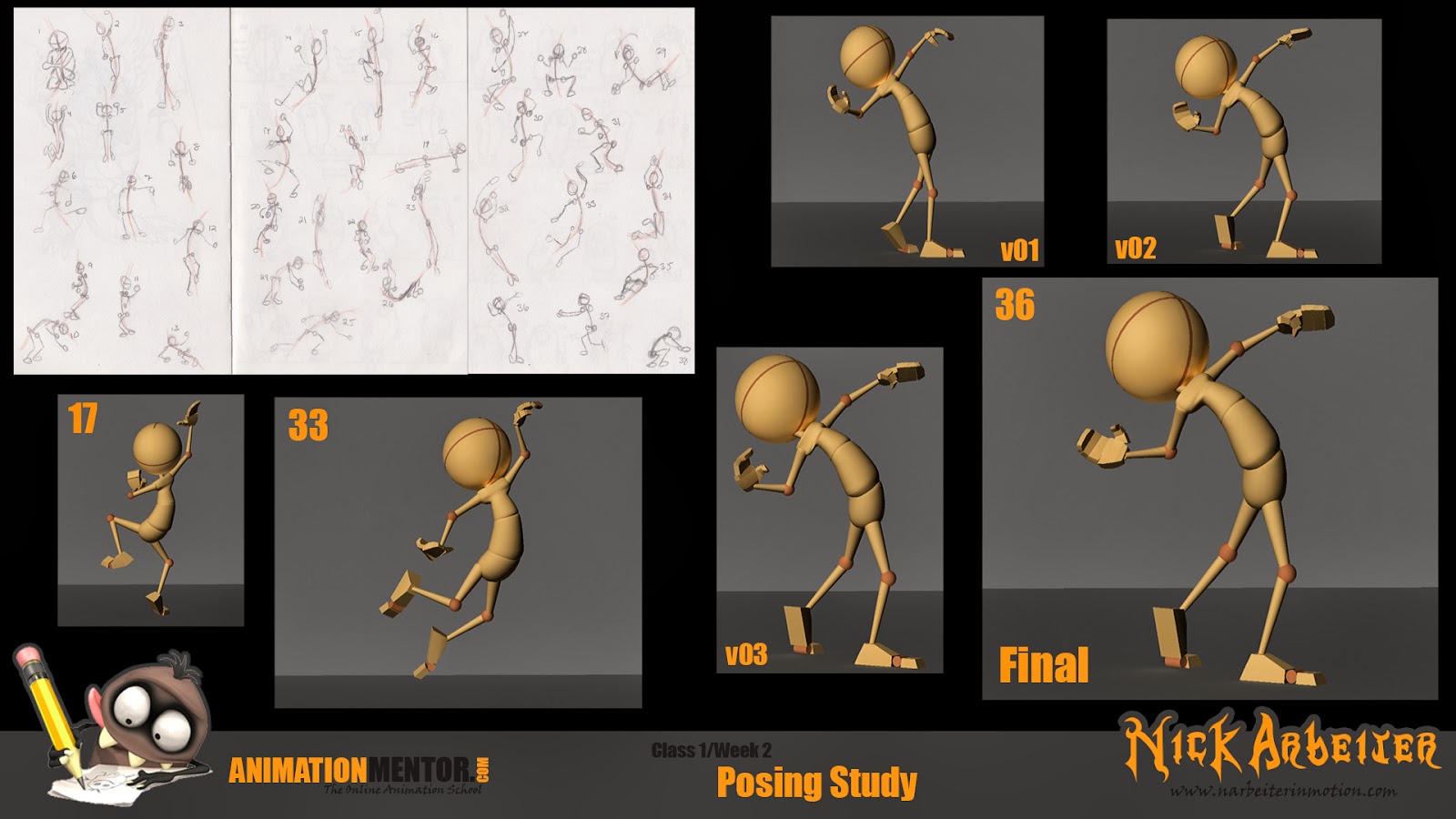 I think I'll definitely start changing the figure I use for my sketches when I have more planning capabilities and actually put some meat on his "bones." But for quick poses and gestures, I found that I like this little stick guys. I draw the shoulders, hips, spines, arms and legs as a stick figure. But for the shoulders and the top of the leg/hip joint, I've taken to drawing circles. This way, I can show overlap if the shoulders or hips are tilted toward the camera. To somewhat of the same effect, I can change the size of the circles to show foreshortening. This also allows for my stick figure man to illustrate the twist of the body. I know it isn't always easy to tell with some of my quicker sketches.

I also think this was my strongest use, so far, of line of action. In almost all of my sketches, I was able to get the figure to follow the curve. Thank goodness for letting go of some mental rigidity. I realized that I was basically holding myself back with posing. In the future, I'll definitely show this more, but now I realized what I can actually do with poses! Crazy cartoon poses all by accentuated curves. The line of action really is the energy of a pose, and using it actually will strengthen your poses. Who would've thought?

When everyone was critiquing my poses, most people enjoyed number 36 the most. However, and in my eCritique these were pointed out, when sketching the gestures of people, I literally attempted to capture what I saw. I didn't try to overly push anything or make what I saw make more sense. That said, my mentor called me out for having some very linear or twinned poses, which I do. The comments my classmates gave in addition to liking number 36 best, was that he felt too lazy and that there was no power behind it. I didn't know if it would be wrong for the assignment or not, but I decided to go with all of the crits and push Stu farther and make it a more powerful wind-up.  Above, you can see the progressions 36 went through. The final version was the one I actually submitted to my mentor.

By the way, my mentor is Don Kim of Nelvana Studios. Haha, guess maybe I should have mentioned that sooner. He critiqued my pose yesterday, and after speaking with him, I went back and tweaked the pose a little further. Pushin' the limit! Here's what I came up with after my mentor's eCritique. 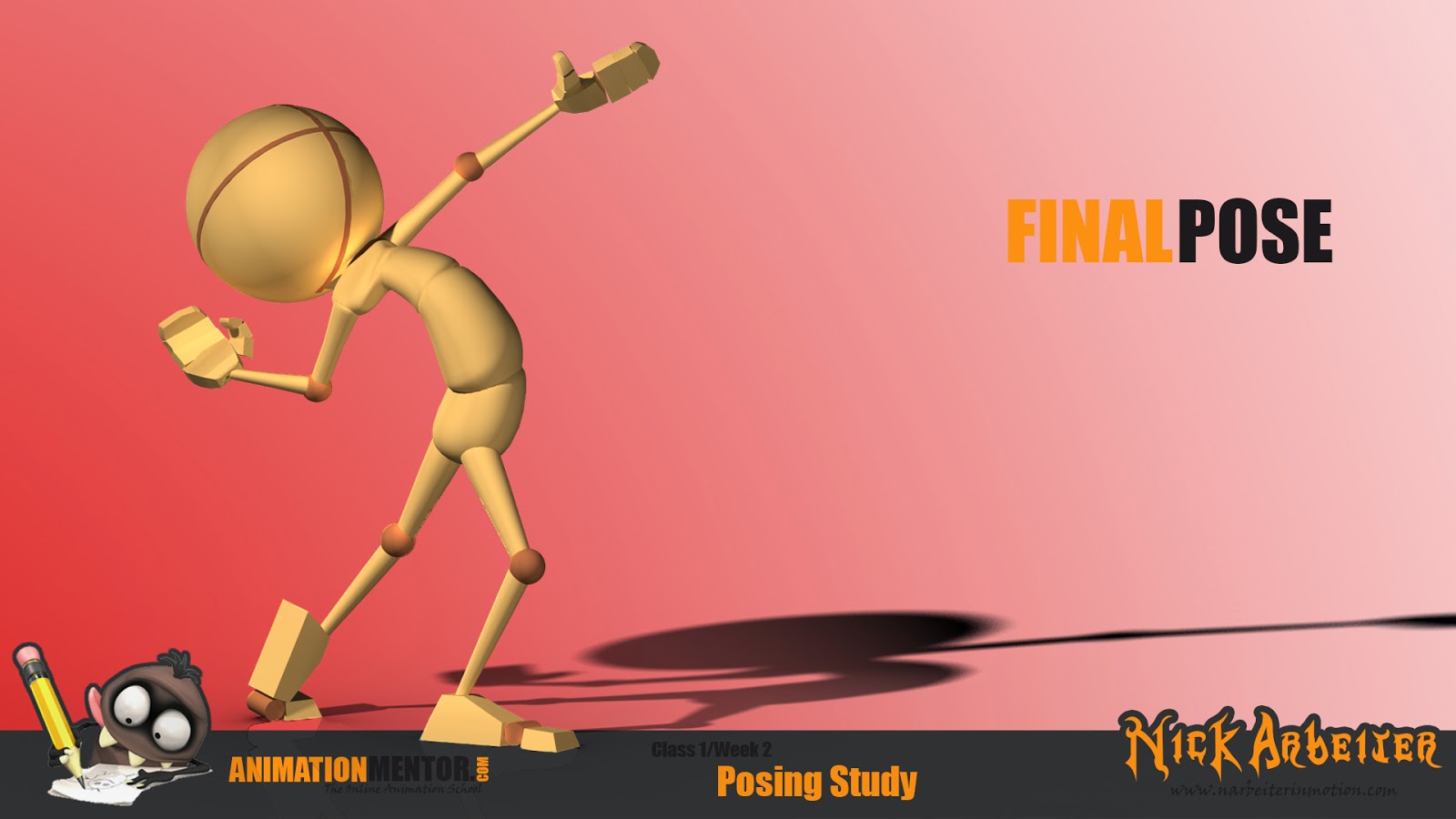 I think I will honestly say, cheesy as it may be, I legitimately did learn a decent amount about posing and gesture. I'm using the line of action a lot more in my gestures, and I have a greater appreciation for the posing and blocking process of animating. I definitely want to get better at overly exaggerated poses. Those crazy cartoon poses that are still believable are what I hope to achieve! I'll have more posing assignments incoming, and the first 3D animation this week! Let's do this.
Written By Unknown at 3:21 AM 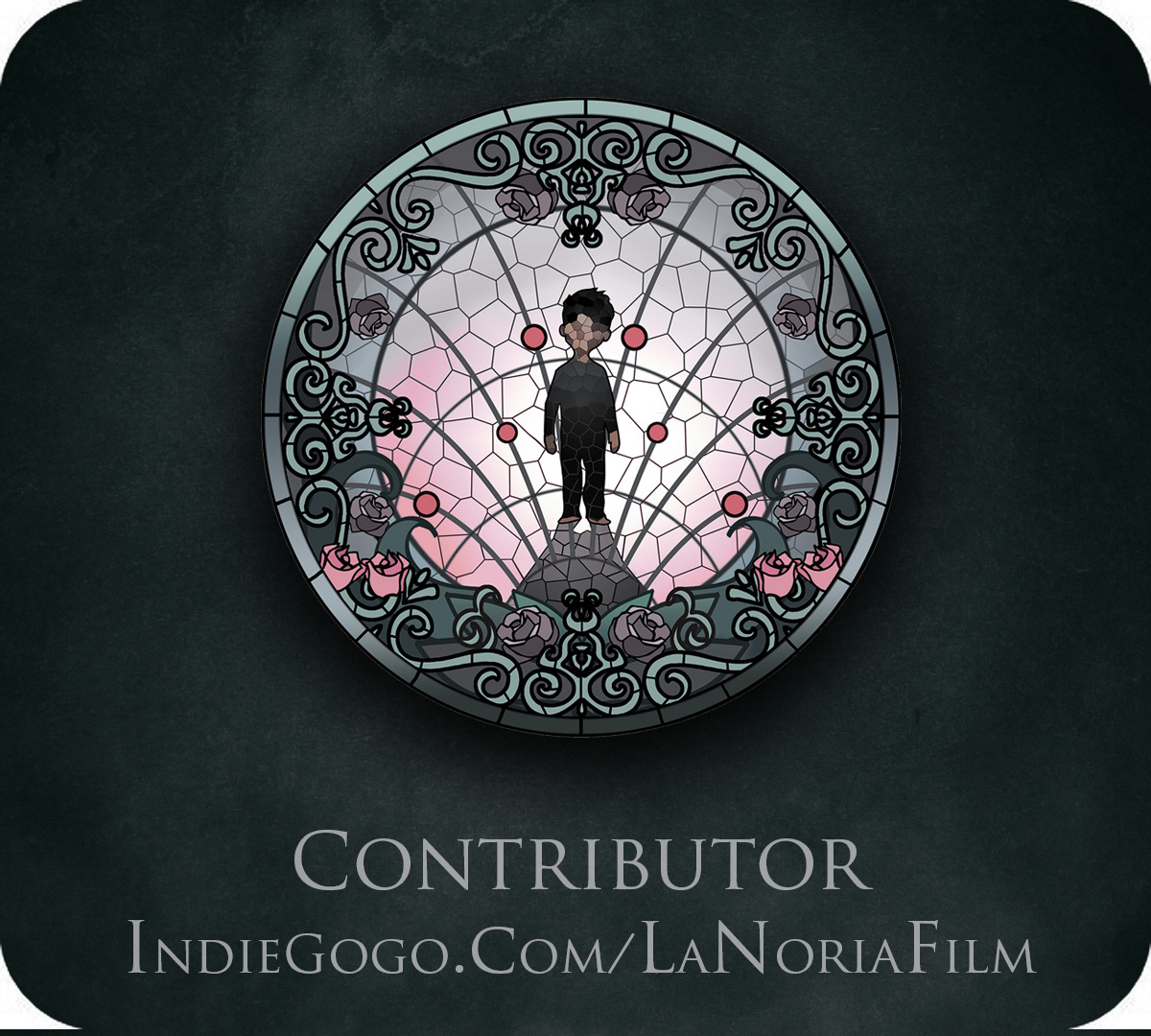